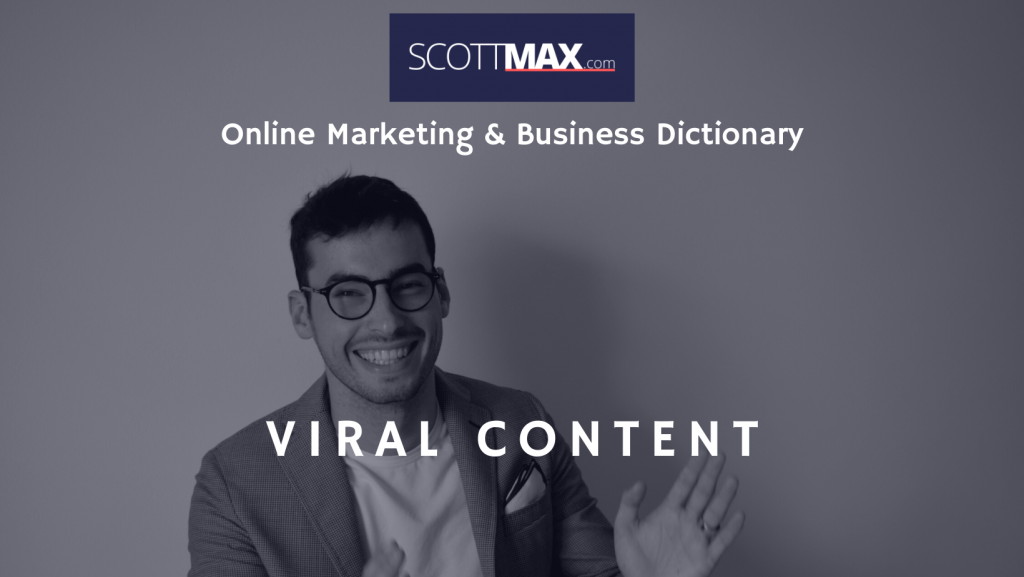 Viral content is content that is spread at a large scale on the Internet, either through social networks, email, instant messaging, etc.

This is my favourite video to illustrate the subject:

With the ease of the Internet and social networks to spread ideas and content, the term viral is used for content that is massively distributed through social networks and blogs and even by more traditional media.

Viral contents are usually those that appeal to emotions or that work very well in the search for insights.

Most of them are of a humorous nature and usually never born with the intention of becoming viral content.

Most of this type of content is created by anonymous users with no intention of mass dissemination, but to share it with friends or acquaintances who are the ones who, considering that it is a material that deserves to be shared, spread it in turn among their acquaintances, who then do the same, until it is shared hundreds of times and becomes massive.

For brands, getting one of their contents to go viral is a great success and one of their main objectives when launching a campaign. However, getting a viral content is not easy.

If you want to know how to make a video viral on YouTube, don't miss this post.

Why does content go viral? Great people in history have tried to answer the oldest of questions. Today we do our best to find and answer.

Why doesn't my content go viral but my clueless competitor's does? As so often, science gives us the answer.

Longer content is more successful than shorter content, despite mobile browsing, despite the fact that our attention span is decreasing...

Maybe it has to do with the fact that 16 times more articles of less than 1,000 words are produced than articles of more than 2,000 words, and you know, differentiation is the first step to success.

Even so, and although your posts don't have to be unnecessarily long, it would be great that if you are going to touch on a topic you propose to treat it in as much depth as possible: you will provide more value, you will touch on more topics, you will be able to capture more long tail traffic and science says that your article will be shared more. Do it for her!

That doesn't mean you should stop making 100-word meme posts. Variety is the spice of life, and it's not always worth it to write long articles: sometimes the time it takes is not worth the benefit.

Well, although it is something quite obvious, it is always good to have the empirical confirmation that after spending half an hour writing a post and an hour and a half looking for the perfect photo (which in the end is the one you saw after 3 minutes, but you have been lowering the bar more than finding better images), at least the effort has served to make the content viralize better. In fact, they are shared on Social Media approximately twice as much as those without images.

3. With Social Media in mind

Social Media is the main cause of your content going viral. It's what can take your content from a slight cold to the bubonic plague (keeping with the viral metaphor and all).

We always say that you have to put love in your content, but where we say love we could also say irrational and uncontrollable hate: the important thing is that you put feeling and your post transmits something.

Curiously, the 3 emotions that work best in the field of content viralization are surprise, laughter and entertainment.

On the other hand, the least profitable emotions to write about are sadness and anger, so try to let that ray of sunshine in you write, nobody likes to read a bitter person.

In the end, keep in mind that people are looking for content that defines us, that allows us to bring value to our networks and share the things that matter to us. Play to it.

In the study they also found that some of the best performing content has been the "Find out what kind of woman you are" or "How old are you going to die" quizzes that come at the end of Cosmopolitan. It may be a bias of the American market, but I would dare to say that the phenomenon can be replicated in Spain (and that it is a niche with less competition).

5. Lists and infographics are a hit

When we segment by content type, the absolute winners are infographics and lists.

You know, very visual content and posts like "The 475 worst places to get locked up with your mother-in-law".

One thing that is actually surprising is that articles like "How to measure better" or "What techniques don't you know" (i.e., posts that ask "what" and "how" questions) perform significantly worse than average.

This doesn't mean that we have to turn all our articles into lists and infographics, but that we order the information in a coherent way, not in huge blocks of text. Write accessible paragraphs, catchy headings, and use graphic resources often.

Rand Fishkin told us that useful graphic resources are better than infographics, and I totally agree, so I am quite convinced that an article with enough resources and well-structured content is shared just as well as an infographic or a list.

According to The Hitchhiker's Guide to the Galaxy, 42 is the number that hides the meaning of life, the universe and everything else. According to this BuzzSumo study, it's 10.

Well, maybe it doesn't answer that many things, but it is the number that works best when it comes to making lists. In fact, the lists with 10 items were shared more than the second on the list, which was 23.

It goes without saying that after this study we will probably see 300,000 contents using 10 and it will stop working so well. Be warned.

7. The author is important

Except on Facebook, where people don't care who you are and don't respect Gods or men.

But in the rest of the networks, the contents that have a small bio of the author are more likely to be shared.

His bet is that on Facebook we share a type of content for entertainment and fun, while on other networks we tend to be more professional, or at least more serious, and for this the source influences, and a lot.

Here we must keep in mind that to write a viral content or a similar click hole based on Facebook it will not be very important to have a renowned author -or to have a simple author-, however, if our content is more serious or professional, it is not only important to clearly indicate who writes it and why we should pay attention to it, but also to indicate the sources of the article and resources that support our conclusions.

8. Surround yourself with influencers

Again, a news bomb: When articles are shared by an influencer, they are shared much more and therefore have more chances of becoming viral content.

What good does it do to know this? Well, it gives us a clue as to the importance of having friends in high places and building relationships with individuals who have a greater reach than us.

Review how viral content has been generated on the topic we want to develop so that we can try to replicate its success through the influencers who circulated it. Creating relationships with them (and other users who are not influencers) is the best way to make content go viral.

We have already insisted hundreds of times that we must share our content more than once if we want it to really work.

We are not going to expand on the reasons, because you have them in that post, but its conclusion is that after going viral the reach drops, and the best way to make it viral again is to relaunch it in our channels and get third parties to share it again, even reaching people who did not reach the first article.

A challenge, but the only secret of content marketing is continuous effort, you should already know that.

Or at least that's the conclusion of the BuzzSumo study. After this, as we said before, maybe it's not Tuesdays anymore.

Our recommendation will always be the one we have always given: If you don't know which is the best day to share content on Social Networks, first measure and then do whatever you want, because everyone says one thing.